Hello once again! In part one of this leveling guide we have covered three quests that are relatively easy to complete and yield good rewards: Witch’s House Quest, Fight Arena Quest and Waterfall Quest. All these quests provide combat experience, to be more precise: attack, strength and hitpoint experience. Today we’re going to introduce a couple more quests that are easily done and will also help you to advance your melee combat skills, as well as prayer. Remember, that to be able to do these you must be a member, so in case you don’t have enough coins for that bond don’t be shy and get some Old School RuneScape gold now!

If you have already completed the quests we have listed in our previous post, you will recognize this place. For those who haven’t, do not worry – it’s easy to find and get to, especially if you’re using a ring of dueling to get there. Get to the center of the hedge maze and talk to King Bolren to begin the quest. Apparently, General Khazard’s forces are attacking the village and once again you will have thwart the plans of this villain. For this quest you will need:
6 logs (or an axe)
Combat equipment (should’ve guessed that)
Food

Agree to help the gnome king and you will be taken out of the maze and into the battlefield. Don’t start flailing your sword or whatever melee weapon you have just yet. War is as much fighting as it is strategy, so talk to Commander Montai (the little guy in red clothes) and give him 6 logs to fix the defences. Once that’s done you will need to find three gnome scouts who have to tell you the coordinates to fire the ballista. Two of the three trackers will give you the coordinates you need, but one will talk in riddles, which are simple to solve, just don’t space-click through the dialog and listen to what he has to say (though, most of it will be gibberish). Once you figure out the coordinates, head to the ballista and enter the coordinates. After the target is hit thanks to your sound military mind (unlike that of some gnomes), talk to the commander again. Commander Montai will instruct you to retrieve three orbs of protection. Check the guide to see how it’s exactly done. There is more than one way to deal with the challenges and you might also want to see how the last boss can be kited. Remember to talk to King Bolren after you collect the first orb of protection! If you are too hasty, you will have to engage Khazard Warlord again! 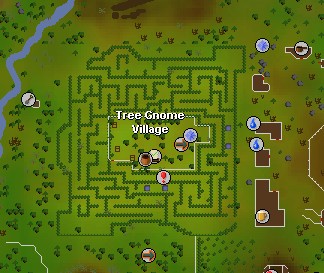 You will find no minotaur in this maze, but it does hide something – the village of the tree gnomes

The famous legend of King Arthur served as an inspiration for countless pieces of literature and motion pictures… And once video games appeared, the legend found its way into them as well. After saving Merlin from his arch-nemesis Morgana Le Faye you will embark on an epic adventure to find the holy grail that will change Gielinor forever. This quest is a little bit different for its rewards as well, since this is the only one yet on this guide to provide you with defence and prayer experience. For this quest you will need:
20 Attack (which by now you should have anyway)
Completed Merlin’s Crystal
Excalibur from Merlin’s Crystal
Weapons and armor
Recommended:
Means of teleportation to Camelot, Falador, Ardougne, Entrana, Draynor
Antipoinson 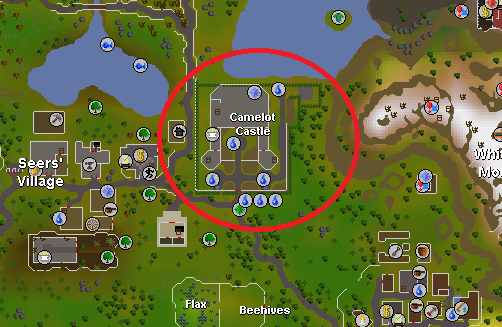 It is here where you will meet the legendary King Arthur and become a part of the legend yourself!

Speak to King Arthur and he will tell you about the holy grail. Then speak to Merlin. Ability to teleport to Entrana will prove very useful now as you will need to speak to Sir Galahad who is on the island. Alternatively, you can travel to Port Sarim and talk to the monks who will transport you to Entrana if you have no weapons or armor equipped or in your inventory (no wonder these pacifists get thrashed all the time). So don’t forget to use bank deposit box in Port Sarim if you’re going to travel aboard the ship with monks. Once in Entrana, talk to the high priest, who much to your demise, will tell you that the holy grail is no longer there. A strange old crone will appear. Listen to what she has to say. Return to Camelot and find Galahad who is in the house west of McGrubor’s Wood. Tell him that you need an item from the Fisher Realm. Now get to Draynor Manor. On the top floor in the southern room by that crazy Pofessor Oddenstein you will have to retrieve two magic whistles. These will not appear, unless you carry the item given to you by Galahad.
Get your weapons and armor and prepare for a serious scrap, as you will be fighting no simple warrior, but a Black Knight Titan. You will need to get to Brimhaven and once there head north-west of the town. Look for a guard tower and go under it and blow a magic whistle to be teleported to the Fisher King’s Realm. It is recommended to drink Antipoison at this point because there are some poisonous scorpions (venomous, actually). Here is where the big fight awaits you. You will have to cross the bridge guarded by Black Knight Titan. Bad thing is he’s kind of tough. Good thing is you can attack-run or simply use a halberd to take swings at him from safe distance. He will not leave the bridge and this can be done without taking a single hit. Take a look at this guide to see how’s it’s done and how to finish the quest. Make sure to use your newly-gained powers to protect innocents from evil, like a good knight that you are!

We will get to more difficult quests in our upcoming posts, so stay tuned! If it happens that you’re struggling with a quest, make sure to train your evil-fighting skills in one of these leveling spots. Good luck on your path, adventurers!