Whether you are a new player or someone who maxed their main account eons ago and are now considering leveling an alt, you want to be as efficient as possible. For newcomers it‘s even harder, since they don‘t know where to start. And those who already have a max level account may want to reach their goal faster. Let‘s admit, we all were those newbies who didn‘t know any better and chose ways to level that were anything but efficient. That’s why we decided to make this guide, so you know where to go and what to kill with your fresh level 3 account. This guide is viable for free-to-play and pay-to-play players alike and if you’re willing to try an alternative leveling method for a fresh account with quests, you can buy some cheap Old School RuneScape gold and get that bond. This post is just the first in this series and we’ll be covering a lot more later, so stay tuned!

This might sound a little silly, but the number of players killing poor chickens suggests that it is definitely worth trying out, especially for newbies. Chickens do little damage and if you have some basic armor they can’t harm you at all. But if you’re just a newbie with bronze sword and shield you brought from Tutorial Island, they are a safe choice and also let player get accustomed and calculate how much damage they deal and how much damage they can sustain. Many may start with goblins since they’re probably first killable mobs a new player sees when out of Tutorial Island, but they will deal you enough damage to force you to pause and wait for your health to regenerate or to make/buy some food. So don’t laugh, chickens are a good and safe option. 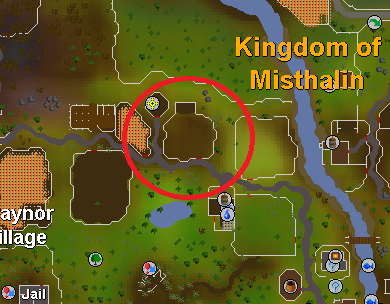 Chicken killing is a popular leveling method for fresh accounts. Don't let your pride make you miss a good opportunity!

Yes, once you see that you’re one hitting chickens and take no damage from them you can go and kill goblins. They’re an easy target, there’s lots of them and once you’re leveled up a bit they pose no threat and can be safely farmed without having to eat shrimps. 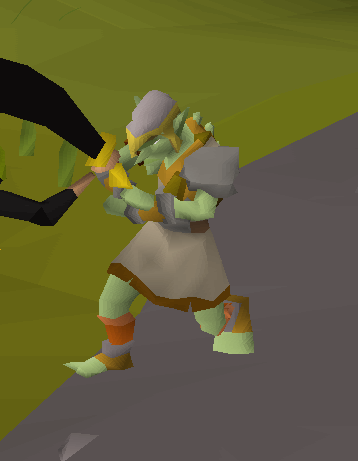 Goblin using his silly martial arts to block a scimitar blow with just his arms...

Cows are a classic and you will often see players wait out of level range killing them for cowhides because that’s a decent low level money making method. For the moment we assume that you’re only doing this for XP, but you want to collect cowhides as well so you can sell them and buy some better gear and then continue on with your adventure. There are basically two spots to do this: you can stay in Lumbridge because of it is close and farm cows there or if there are tons of people farming them (which may very well be the case), go to another spot which is south of Falador. It’s a longer way to bank, but a viable option if Lumbridge pastures are overcrowded with cowicidal maniacs. 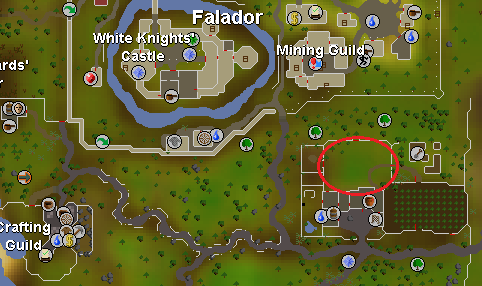 Cow farmers in Falador are confident that their cattle will remain safe. Show them they are wrong!

This might sound strange, but in Gielinor getting into fights with law enforcement can be very rewarding. But only in Gielinor, so don’t come up with any funny ideas. After you have leveled up enough by butchering innocent cows and earned enough coin to purchase best equipment you can use, head to Al Kharid palace. Carry some supplies and coins with you (to pass through the toll gate) and go south. Eventually you will see a big building. Go inside. Swing your weapon at a guard and watch those level-up messages popping up. You can farm Al Kharid guards up until combat level 45. Al Kharid palace is a multicombat area, meaning you can engage multiple enemies at once, unlike in previous cases. This is extremely useful once you see that you can easily handle a single guard: attack one guard, attack another and then you can basically go AFK if you wish. Just make sure auto retaliate is turned on!

During peak time Al Kharid palace resembles a battlefield more than a palace.

We wish you good luck on your path of the warrior and hope you will find this beginner’s guide useful. As mentioned before, all these leveling methods are available both to free-to-play and pay-to-play players. However, pay-to-play players have an easier, faster and less grindy way of reaching combat level 45, which we will cover another time.