Old school Runescape is filled with all kinds of various different types of money making methods. You can use almost any skill in the entire game to generate some form of income. Whether it be thieving, woodcutting, smithing, any skill can make you money in some way, shape or form.

However, one of the most popular methods in the game to make some Old school Runescape gold is through the combat skills. This includes the skills: attack, defence, strength, magic and ranged. Pretty much slaying some sort of monster with any of these attack styles. Using combat to make money is very popular in the game because of the fact that it is so diverse and open. You can choose to kill between hundreds of different monsters using any attack style or even combine the attack styles at places such as Zulrah or demonic gorillas.

In this guide, you will hopefully learn a few of the combat money making methods out there in Old school Runescape. These should benefit you greatly in terms of making good money and combat experience at the same time. It is good to note that some of these money making methods will require membership. You can buy bonds using cheap osrs gold which can be found here.

-Level 65+ in either melee skills or ranged

Killing green dragons is one of the most popular combat money making methods in Old school Runescape. This is because of how minimal the requirements are and how easy and simple it is to get these requirements.

Green dragons have two very basic attacks which are not at all difficult to counter. The first one is its melee attack, it will sometimes perform this attack if you are within its melee distance. This is about one tiles distance. The green dragons will not use this attack if you are not close to it. The melee attack does not typically deal much damage however it is still a good idea to bring a couple of pieces of food depending on your combat level. The second attack the green dragon performs is its fire breath attack. This is not very damage dealing to the player as long as you have your anti dragon shield equipped and anti fire potions drank. This should protect you from getting damaged too much.

It is good to note that this money making method requires you to be in the wilderness while killing the green dragons, so do not bring any thing extremely valuable or you are at risk of losing it. Green dragons is a popular hot spot for pkers to hunt.

To begin this method, head over to the wilderness and go to the location provided below. 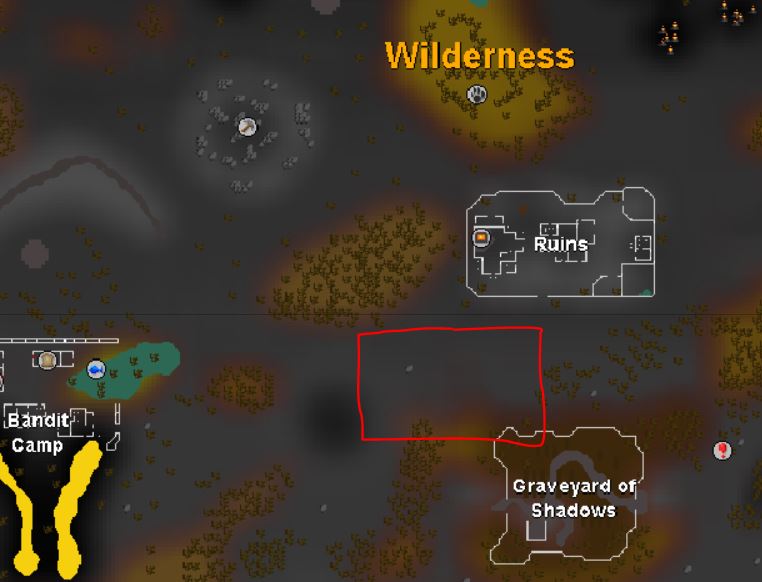 The red square shows you where the green dragons are located. You can get here using the games necklace and teleporting to the Corporeal beast cave, then leaving the cave. You will see a warning letting you know that you are now entering the wilderness. Once you arrive at the dragons, simply click on one of them and pick up the green dragon hide and dragon bones. Bank the items and repeat. You can also set up a cannon with cannon balls near the centre of the red square to get faster kills per hour. Using this money making method, you can expect to gain roughly around 450k GP per hour. Of course, the higher your combat skills level and better gear will result in a better profit per hour.

One of the best money making methods using combat skills is to slay vorkath. Vorkath has a very good drop table with high valued items. Many of these items are typically medium priced and nothing extreme however they can add up very quickly. The reason for this high valued drop table is because of the extremely high requirements to even unlock the ability to fight vorkath. It can take a very long time to complete dragon slayer 2.

Vorkath is a fairly simple boss to slay after you learn the mechanics and attacks of the boss. A map of the boat you take to get to the boss will be provided below. Although you should already know how to get there as you learn how to do so in the actual quest. It is good to note that the quest version of Vorkath is much easier compared to the post quest vorkath. Also, if you die here, you will have to pay 100k at the man near the boat to get your items back. However if you die before collecting your items then you will lose everything. 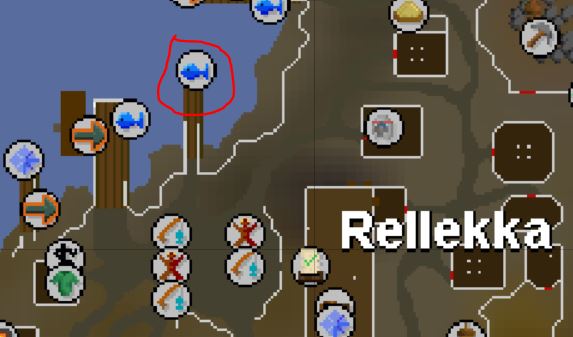 Once you kill vorkath, grab its loot, teleport to a bank, deposit your items and return to kill it again. Repeat this process until you run out of supplies. It is a good idea to bring along adamant darts if you are using a toxic blow pipe because of the good damage and cheap price. Using this money making method, you can expect to make roughly around 1m+ GP per hour.

Killing brutal black dragons is a very profitable combat task in Old school Runescape. They do require a high slayer level of 77 however once this is achieved, this money maker will surely make you a wealthy player.

If you want to skip the long grind of getting these skill requirements, you can check out some accounts to buy right here and jump straight into the action!

To begin, enter the catacombs of Kourend and walk towards the north - west. A map will be provided below. However you can always also use the in game mini map. 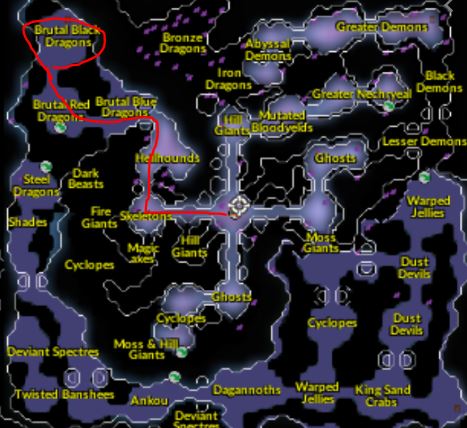 You want to stand in a corner and start attacking any of them. There will be a total of four that spawn in the area. It is a good idea to stand in the corner of the room to ensure that the brutal black dragons do not perform their melee attack on you. This attack can potentially kill you if you are not paying attention, and most likely, you will not be paying attention to the screen as this is an AFK task. A picture of the brutal black dragon room is provided below. 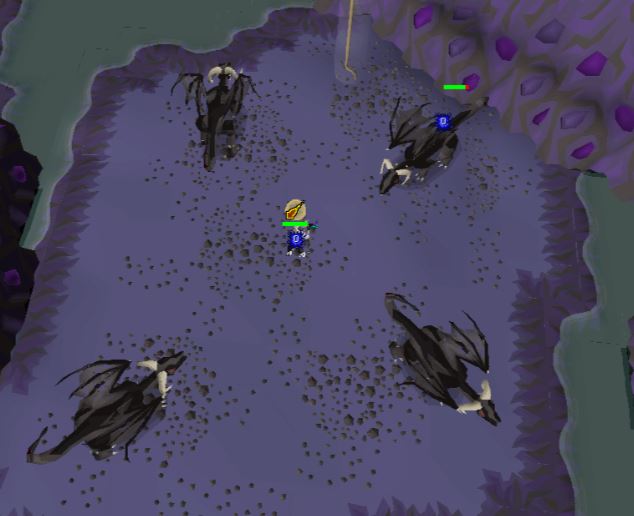 The brutal black dragons have a very good drop table. Almost all of the items are valued at a high grand exchange value. There are also many alchable rune and dragon items so you could have longer trips if you bring along nature runes and fire runes along with level 55 magic for high alchemy. Longer trips would mean you profit per hour would be greatly increased. Prayer will be drained very fast here, however there is a well located, convenient church nearby which contains an altar inside allowing you to replenish your prayer level back to full. This means you can jump straight into action to the brutal black dragons and continue making money. Using this money making method, you can expect to make roughly around 700k GP per hour.

Killing ogres is one of the most popular methods today to make money in the F2P worlds because it is simple and there is an advantage of getting a higher combat level by fighting against them. They have various different profitable drops which can be sold on the grand exchange.

To begin this money making method, once you start or complete the quest “The Corsair course”, go to Corsair cove, south of Feldip hill. To get to Corsair cove, take the ship located at the west of the Player owned house (POH) portal in Rimmington. A map will be provided below. 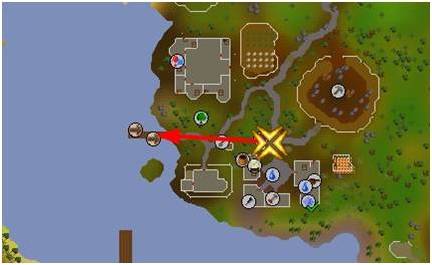 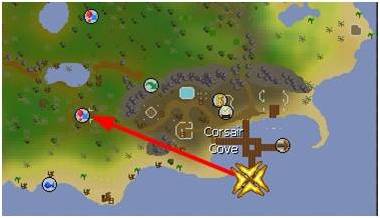 While in Corsair cove, get off the boat and walk towards the west until you reach the only dungeon in that region. It is highly recommended to use ranged attacks because  you can safespot the ogres. It is possible to be AFK (away from keyboard) for hours here so it will make your experience killing these ogres less painful, which will encourage you to stay longer. Being inside the dungeon, go and start attacking the ogres with ranged attacks, collect the runes and items. Rune items can be high alched and converted into GP to save inventory space and save on trips to the bank.

Using this money making method, you can expect to make roughly around 120k GP per hour here.

Killing gargoyles is a semi afk task in Old school Runescape. It is very profitable and allows you to gain very good experience in your combat skills. Slaying gargoyles require a slayer level of 75, which is not very quick to obtain, so the requirements can be a little bit demanding. Once again, you can buy accounts with the skills already aquired here. However with high requirements comes high rewards. Gargoyles frequently drop good valued items such as rune items and even cash stacks. Most of the gargoyles' drops are high alchable, meaning you are able to stay there for a long duration of time thus increasing your profit per hour greatly if you bring high alchemy.

They are located up the ladder of the slayer tower. The slayer tower can be found north - west of canifis. This is displayed in the map below. Follow the red lined path shown. 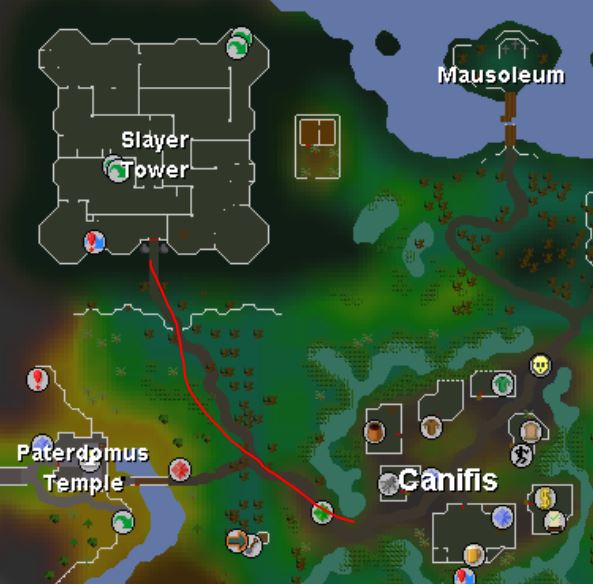 When you reach the slayer tower, make your way upstairs where you will see the gargoyles. A Guthans equipment set is reccomended here as you are able to stay longer because you do not need to carry much food as you are constantly getting healed from all the hits and damage you do. Gargoyles are weak to crush, so bring a crush weapon if you can if you can not get a guthans set. A bludgeon is a good crush weapon or a Verac's flail.

You should expect to make upwards of around 500k GP per hour here depending on your stats and gear. The better your stats and gear, the better profits you will gain. You may notice that most worlds are packed with other players, if it ever gets too packed to a point where you cannot attack any, simply hop around a few worlds until you find an empty one.

Chaos druids are another one of the most popular, beginner monsters to kill in Old school Runescape. This is because of their low damage yet medium health. This allows for players, typically new players, to train their combat skills on these monsters while making a decent amount of money in the process. Chaose druids are known for dropping many, many herbs. Most popular being the ranarr weed, which is where most of your profits come from.

To begin this money making method, you want to first head over to taverly dungeon. This is shown in the map below. 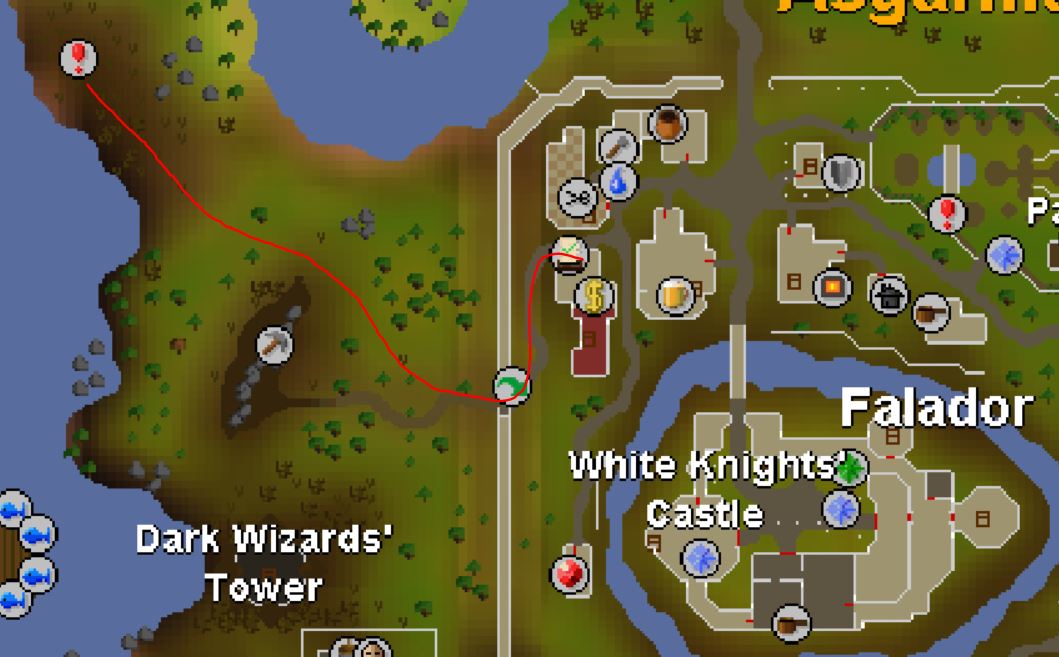 As shown in the map above, to reach the Taverly dungeon. Simply start at the falador bank and follow the red path way. An agility short cut is present however you can also go through the main taverly gates which is just north of Falador.

Once inside the taverly dungeon, simple head over and follow the path straight without entering any doors or gates. You will shortly find yourself with the chaos druids. Simply kill them, pick up their loot, and then return to falador bank to empty your inventory. A falador teleportation method is useful here but not at all needed. You should expect to make roughly an average of 100k GP per hour.

These are just some of the many Old school Runescape combat money making methods that I have to share. There are still hundreds possibly even thousands left that are still unexplored. Enjoy these money making methods as it will make you a very rich player. If you ever need to sell your osrs gold for some real money, you can do so here.

Thank you for reading this guide.