The Theatre of Blood 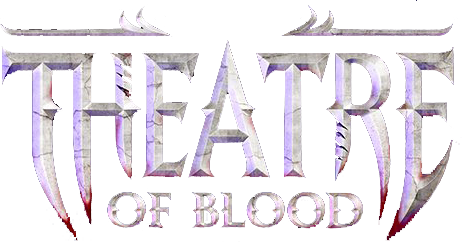 Welcome to the theatre
We got fun and games!

Theatre of Blood seems to be an interpretation by the vampyres of the old saying “bread and circuses”. These cruel creatures enjoy nothing more than mindless killing or killing of the mindless. Now, the theatre was built and intended for the entertainment of Verzik Vitur, one of the few remaining true-born vampyres on Gielinor. Theatre’s poor participants were supposed to be the citizens of Meiyerditch who wanted to gain freedom which they would get on the condition they succeeded to overcome the challenges within the theatre. Much to dismay of the vampyre lady and the citizens themselves, they were unable to provide much entertainment and just filled the ranks of the abominations lumbering around the theatre.

That’s when adventurers like YOU take the stage. The Theatre of Blood is not only a fancy name for a raid, but it actually is a theatre and the players are also able to enjoy the show via spectator system –by attempting to enter the theatre alone or speaking to NPC Abigaila who is located upstairs in the Lumbridge general store or near the spirit tree by the Grand Exchhange. You just have to enter the name of the person you wish to spectate, a name of another spectator (that’s some inception stuff right here) or just search for a newly-formed party of adventurers. That’s good for players who are not yet sure if they’re up to the challenge and want to see how everything works from the safety of their seat in the audience. Those who wish to participate themselves must form a party of 3 to 5 people, the more the merrier.

But let’s get to business. The process of entering the Theatre of Blood is simple, you have three options:
A) Travel there on foot
B) Via a boat north of Port Phasmatys (for a fee of 10,000 coins)
C) Complete the quest A Taste of Hope; then you can use Drakan’s medallion to teleport straight to the Theatre

The raid itself is linear, meaning that you will encounter all the bosses in a single order, so you always know what to expect. You can join a party or form your own via the board outside the Theatre of Blood. We advise you to form a party with your friends and be on some sort of voice chat, since cooperation and quick reaction of all party members will be required in the raid. Having someone experienced on board wouldn’t hurt either.

Though you might come across some random loot and supplies, bosses drop better rewards and completion of the whole raid (i.e. defeating Verzik Vitur herself) will be rewarded most handsomely. A trapdoor to the vault will open and there players will find 5 loot chests and an arrow pointing to the loot chest for a specific player. If you see a purple aura around your chests – rejoice. It’s not some sort of trap or anything. This indicates that a unique reward awaits you in that chest. You can check those rewards out in our post Theatre of Blood: Unique Rewards. Keep in mind that rewards are proportionate to your performance (damage and deaths). Players who are interested in game lore can also search the Grand bookshelves for six books related to the Theatre of Blood.

Dying in the Theatre of Blood

Upsetting the vampyre hostess by dying in the Theatre of Blood will prove costly. It will lower your performance rating, meaning that you will receive less valuable rewards. In addition to that it will the current boss fight will turn sour for your teammates. When a player dies they’re transferred to a “Purgatory” and can rejoin their party after it has completed current boss fight. If the whole party is wiped, then all players die for good: all unprotected items will be put in a chest with an option to reclaim them for a mere fee of 100k gp. Upon death hardcore ironmen will also lose their hardcore status and will become, well, common ironmen. Keep in mind that if you die an unsafe death before you reclaim your items, they will be permanently lost. IMPORTANT! Logging out outside combat area is considered a safe death and upon logging in the player will rejoin their party. Logging out during a fight and then logging back in will be considered an unsafe death and if logging back in process is successful, the player will be put into purgatory and will have to wait for the party to finish the fight. The player is considered dead for good if they fail to reconnect and they’ll lose unprotected items (same conditions as in case of entire party wipe)

The Theatre of Blood is another example of game developers keeping the game fresh, yet remaining loyal to its legacy. Less and less MMORPG’s can say the same. The second raid is a challenging one, like nothing we’ve seen before in Gielinor. Dying is costly and the raid itself requires close to top gear and a solid amount of supplies. If you wish to participate but your bank account is insufficient, don’t you can always buy runescape gold – we’re here to help you out!