Old School RuneScape was brought back to players because they have requested it. What at first was supposed to be just a maintained version of the game and only for subscribing players (buying bonds for gold was a non-existent feature) has evolved into something else without losing its soul. Warding skill is one of the many results of this evolution. We have already covered what warding was supposed to be in the beginning. Now, after the good reception and polling some changes have been made.

Essentially warding is a new skill made to fill in a gap for certain type of equipment, namely mage armor. Until warding update is launched players do not have the ability to make mage armor themselves and after warding is introduced they’ll be able to. At least that was supposed to be in the beginning. We have already covered what warding is and how warding works in our past post. Though there are some changes, the core essence of Warding skill remains the same.

Warding as any other skill requires tools. There have been some changes made. Instead of soapstones we now have wardstones. Wardstones come in two types: elemental and catalytic. These are created by the player using a channeling lamp. There’s also a new warders kit tool where you will be able to store these wardstones so they don't flood your inventory. Unlike in the past, now you will not need to find a monolith to make use of warding skill, instead wardstones are used to draw wards on the ground. They function very similarly to fires and other players can use these wards too.

These magical symbols can make items appear or dissappear: it's completely up to you!

What are Channeling Lamps?

Previously known as "soapstones", wardsones have probably changed the least

Channeling lamps one of the key items in Warding

Instead of runic energy which was proposed in the past we get vis. Vis is a material stored in a channeling lamp and is created when runes are used or when equipment is dissolved. Vis is not always required. Elemental vis can be saved if the ward type is of the element required by a piece of armor. In case the piece requires fire vis, fire ward will abolish this need. In this way wards act similarly to casting spells using an elemental staff: casting fire spells while wielding a fire staff requires no fire runes.

Fabric is nothing new to Old School RuneScape. There are tons of cloth types already in the game.

Dissolving is an activity which makes your super powerful equipment go “poof”. This is the thing you’ll need to do to get that sweet fix of vis and maybe some materials that were used in making the item you’re dissolving. Place an item on the ward to begin the dissolving process. Note that you will always get vis depending on the ward used and your Warding level, the same cannot be said about materials, though, as there is only a small chance to receive them. The chance depends on the tier of equipment and level of Warding skill. 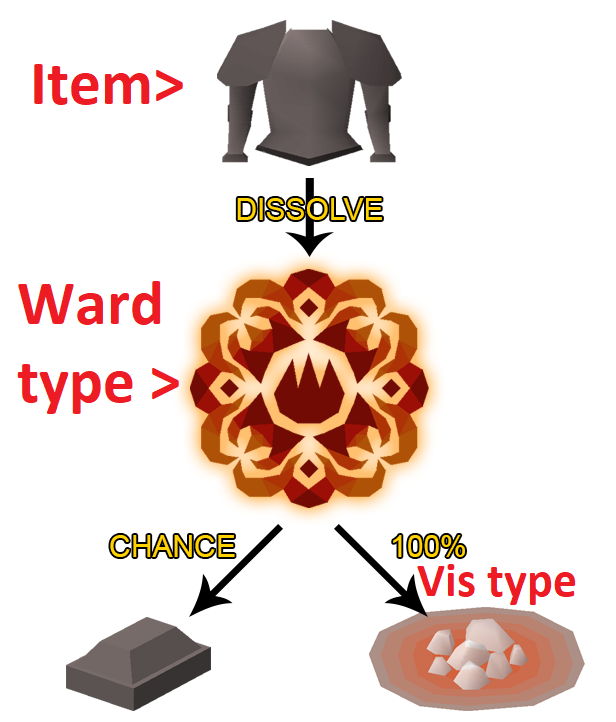 Dissolving is essential to Warding: it gives the essential vis, gives a minor amount of XP and also acts as an item sink

What Else is Changing?

At the moment there are not only new features introduced into the game, but also some of the old stuff is getting a little tweaking in order to make more sense once Warding is out. The list is long and you should check OSRS webpage for that (scroll wayyyy down). No doubt there will be lots of new OSRS money making methods once Warding comes out. Make sure to make the most of it and sell OSRS gold and make real money!