A new update in the middle of the summer brings with it new items. In addition to that, there‘s talk of a new quest coming (Troll Quest). New revenant cave rewards is welcome news to all gambling types, since their main function is to kill monsters dwelling in the Wilderness. Why gambling? Well, it‘s painfully obvious – Wilderness has many dangers besides monster that inhabit the wasteland and the biggest danger of them all is none other than your fellow adventurer. So those who like to try out their luck and risk big for big rewards will now have new tools at their disposal. But we‘re getting carried away, let’s see what these items are. 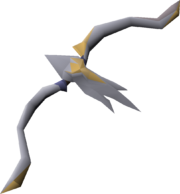 Despite the misleading name, it‘s not a crossbow, but a shortbow and was uses by Craw, one of the warriors who fought in the God Wars. As we‘re talking about Revenant Cave Rewards it‘s no surprise that this item, alongside others, is looted in Revenant Cave. Its bonuses are identical to the magic shortbow, however, same as crystal bow it has its own ammo. To activate the bow you will need 1000 revenant ether and additional 1000 to get the 50% accuracy and damage bonus. 1 shot consumes 1 revenant ether regardless if it hits or misses. Death will make all revenant ether to be dropped, even if the weapon itself is one of your protected items. 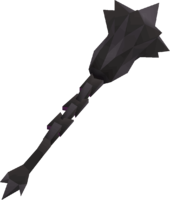 Unlike its elegant ranged counterpart, Viggora’s chainmace surely looks vicious and dangerous, thus perfectly fitting the Wilderness and Revenant Caves. This weapon requires adventurer to be advanced to level 60 in attack and has similar stats as dragon scimitar, but as you can tell from its looks, Viggora’s chainmace is a crush weapon instead of slash. You would 1000 revenant ether charges only to use the weapon and another 1000 to enjoy a 50% melee accuracy and damage bonus. Similar to Craw’s bow, one hit consumes one revenant ether. For item to be tradable all stored ether must be removed. 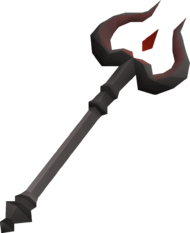 Another devilish weapon requires you to have magic level 60 to wield it. It has the same bonuses as master wand, but cannot autocast ancient magicks. Same deal as before, you need 1000 revenant ether to charge this weapon and another 1000 revenant ether to activate 100% magic accuracy and 25% magic damage bonus and it consumes 1 ether per attack.

Now this one really captures what Wilderness is all about: death (item looks) and greed (the name). Amulet of avarice has the same bonuses as amulet of glory. But amulet of avarice is special in that it will make you permanently skulled. Upside of wearing it is that all items received from monsters in the Revenant Caves will be instantly turned into bank notes. Once you take off the amulet, the skull will hang heavy above your head for another 20 minutes. Now that’s really a must-have item for any happy-go-lucky adventurer!

Making Friends with My Arm

A new addition to already substantial quest list was announced and might make it to the game. The trick is that it will have to pass a poll, which it probably will, but while you’re on your summer holiday don’t let the holiday mood get into your head too much and perform the duty of a responsible citizen and cast your vote! It counts!

As always, we hope you enjoyed reading this. Do check out Revenant Cave Rewards and Troll Quest Announcement. Also, the items on the list, well, they’re costly. And if you wish to be the first one to get them or simply can’t spare time to grind you can always buy runescape gold fast and easy. Until next time!