On August 9th Jagex launched a new update which may be important for a lot of people who are mostly PKing in OSRS: upgraded looting bag functionality, PID (player id) channges and bounty hunter targets. There‘s also talk about upcoming in-game collection log. It was not realeased with this update (as you probably noticed) but there has been made significant developments. We‘ll give you a short recap:

Lootings bags, although very useful, sometimes became a nuisance as well, especially when you had a lot of items to manage. Now, by selecting „Open“ option you will make all of your new items to go straight into the looting bag. Close the bag and items will go into your inventory instead.

Player ID‘s do not seem to play that much of a significant role in OSRS as they did back in RuneScape Classic, they still have their uses and Jagex has introduced some changes here as well. On PvP, tournament world and Bounty Hunter PID‘s will randomize more almost three times more often (24 to 36 seconds instead earlier 60 to 90 seconds). More changes are possible.

Those coin-thirsty bounty hunters now will have an option to increase or decrease their risk by toggling whether they want receive targets in above level 10 Wilderness or not.

As mentioned earlier, collection log has not been released, but we can already see how it may look like. Collection log will make it easier to boast to your friends about some of your achievements and we estimate that it will boost self-esteem also, as it will be easier for players to trigger their memories of legendary adventures. Collection log currently is separated into four categories: bosses, raids, clues, other. Slayer might become a fifth tab (a bit strange that they didn‘t include it by default). Note that collection log will keep track of significant items and in the future might also have more functions, like tracking the source of a specific item. Since this feature is still in the making you can make your suggestions and address them to Mod Lenny by tweeting him. Don‘t remain silent if you think your idea is good and other players will find it useful too! 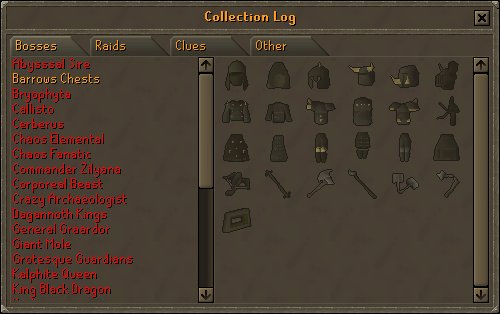 Collection Log in OSRS. You can see the general idea how items will be sorted.

This is just a shortened version of the recent update. You can check the full and more detailed list of updates. One feature of the collection log is the ability for other players to see your collection, so if you feel like you need an additional item to get bragging rights, don’t hesitate to buy some RuneScape gold and get that item you always wanted – we’re here to help!