So, an upstart adventurer is becoming more and more proficient at ridding Gielinor of various kinds of pests and monsters. Sometimes livestock, but mostly monsters and pests. And now you may be wandering where to go and what to do? Maybe head to Wilderness and show off your newly gained prowess by slaying other adventurers that are not as skilled at the art of war as you (of course, they’ll most certainly blame RNG or lag after a bitter defeat. Take that as a compliment) or build up your OSRS gold supply? Or maybe delve into the lore of RuneScape by accepting quests from various inhabitants? Now, whatever you choose, know that a game has to bring you joy. And for those who have dealt with previous challenges and wish to proceed on their path to the top, we have a suggestion where to go next.

Once you’ve done slaying chickens, goblins, cows, Al Kharid Palace guards and/or done all the quests, you need a new place to level up. And at levels 45 through 60 there is one good place to do so. 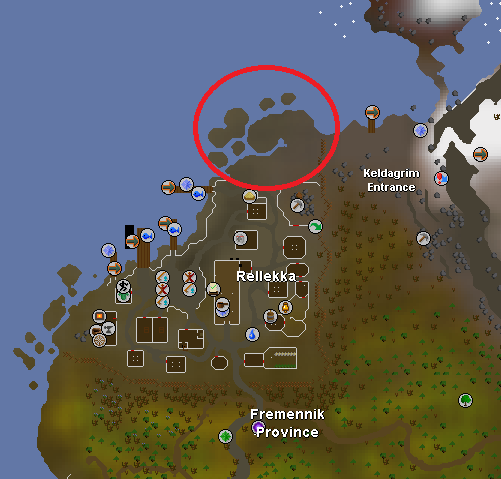 Rellekka rock crab habitat is often a go-to place for many adventurers so you might need to hop worlds sometimes. Despite how popular this pastime is, Rellekka rock crabs do not seem to be anywhere near to becoming an endagered species.

This spot is also a multicombat area, meaning that you can aggro more than a single monster. Do not worry, rock crabs do not hit much and you can safely take on more than one of them at a time. Also, for those who wish to level up their range, they can use Dwarf multicannon here – this spot is probably one of the best to unleash your secret weapon. If this map does not seem to be informative enough, you can check how to get to Rellekka rock crabs all the way from Draynor village.

In case you wish to take a break from wiping all life from the face of Gielinor and instead wish to become a wealthy member of Old Schoold RuneScape's society, we have some suggestions how to do that as well without putting too much effort. However, for all of you "I want it all and I want it now" kind of people, we always have some cheap RuneScape gold in our stock.