How to Spot a RuneScape Scam

How to Spot a RuneScape Scam

What online games brought to the table of gaming industry was people. In single-player games you are the main hero and all other characters are just NPC‘s, whose behavior is already programmed and depends on the creativity of the game’s developers. Those characters can all be very different, but this variety pales in comparison to the fauna you meet in online games. Just like in real life, people you meet there are very different from one another: some are very nice and talkative, some are nice, but less chatty, some are there only for the game and cooperate with other people only when there’s need for that. And, of course, some people in real life will cheat you for their personal gain. This, let's call it a trait, combined with the anonymity of online games is a perfect niche for such folk to thrive. Today we’re going to look into such people, to be more precise: how to avoid being scammed by them.

One of the most common form of scamming is impersonating someone else. The scammer will tell you that they’re someone else and will have some demands/requests. Usually they present themselves as Jagex mods or representatives, but they sometimes choose to impersonate someone else as well: your friends, some famous RuneScape content creator on youtube, other very well recognized players or, in some  cases, they pretend that they work for a gold site like EZRSGold and ask you to give your RuneScape gold to them. And let’s not get started on all the imposters on various communication channels, such as skype, discord, sythe or email. Whenever you have suspicion that there’s something sketchy, don’t hesitate to contact us via live chat. In other cases, always now that Jagex mods have a “Mod” title in front of their name and a crown icon and remember to always double-check the nickname of your friend or even ask them about what’s going on outside the game; double-check nicknames of youtubers and famous players as well: scammers usually create a very similar nickname with a slight variation and if you’re not careful enough, you might get tricked.

Now this type of scammers isn’t very subtle. They often plainly ask, or even tell, you to give them your gold or some valuable item. They give tons of excuses and reasons why you should or must do so and if you’re for some reason scared, that Jagex, for example is after you, you might be not thinking clearly and not paying enough attention to notice, that their demands are ridiculous and unjustified. Jagex will never ask to take gold or items: they will issue you a warning or outright ban you and all communication will go via their official channels. Remember: always pay attention, if you have any doubts, then do not give anyone anything!

How many times do we have to be told not to open any suspicious emails, sent by an unknown person? How many times?! This is one of the most popular forms of scam on the whole internet. Even government officials fall for that and this causes a lot of damage in form of leaked data and potential software/hardware repairs. Our RuneScape accounts are dear to us and we should take good care of them. One of the things to prevent your data getting into the wrong hands is to avoid opening any emails of unknown origin and following any suspicious links. Or else you will suffer like this person: 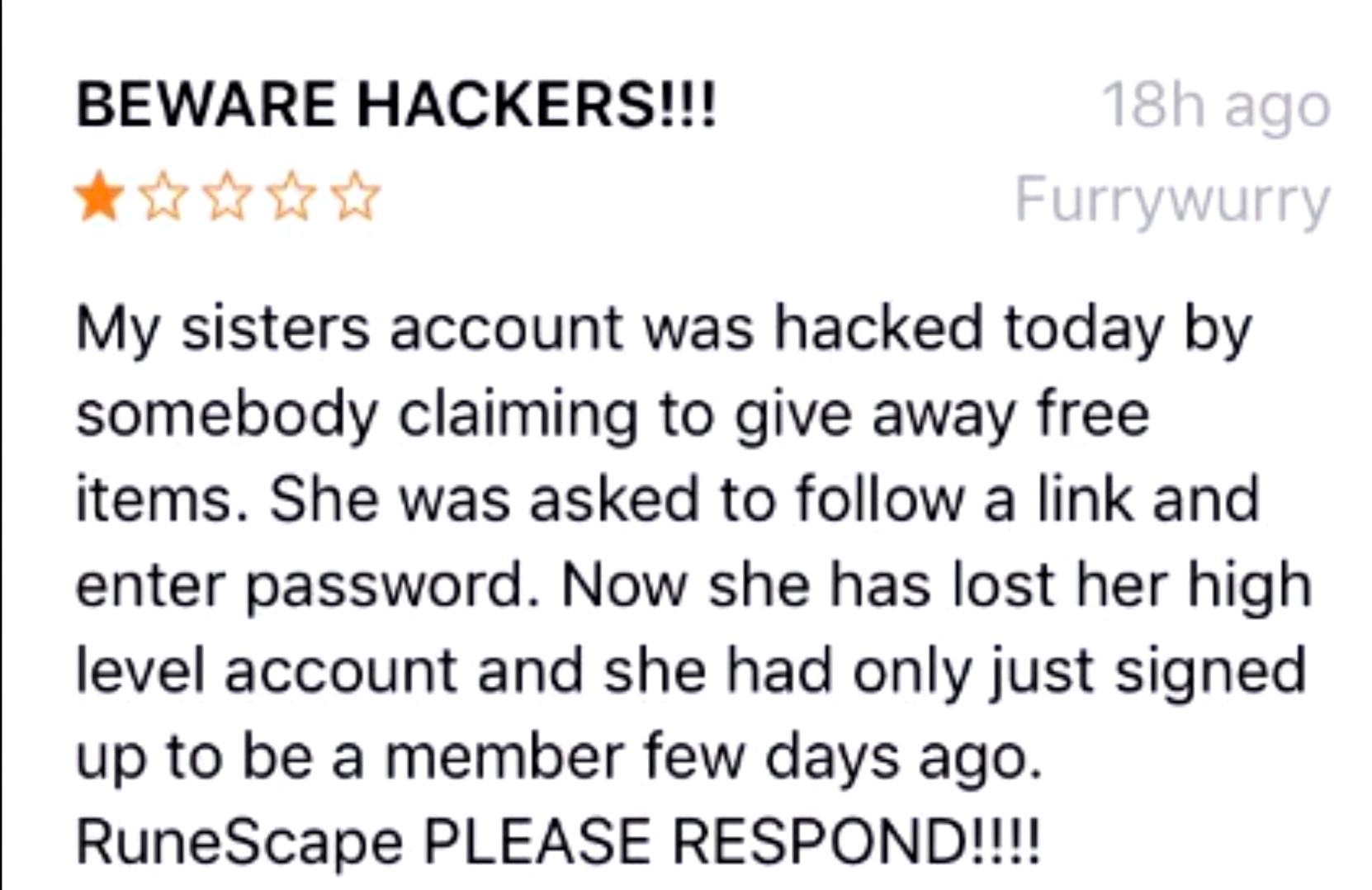 This is one of more popular scam methods, pay attention!

In this case, they do not seem to open an infected email. Instead, what they did is put their login information into a third-party site for some in-game gain. This is one of the oldest tricks in the book. The way it works is very simple: all the data you enter is sent to the owner of that site. I remember when I was a kid back in the day when internet wasn’t such a widespread phenomenon, a classmate told me about this script. It’s presented to the site’s visitor as an email form (and was intended to work this way): in the first field you enter your email or your nickname and in the second you put in your query. The first field was necessary for correspondence. Now what scammers did is that they simply changed the titles of those fields and tell you that once you enter your data you will get access to the game via their tool and you’ll be generating any wealth you want on your account. Anything, really. Want 100k XP? Check. Want 5b gold? Check. This is, of course, a very primitive scam tool, but I know people who fell for that. Currently it’s more sophisticated than that, but the principle is the same.

Oh boy is Twitch an amazing thing. And as with all such things, scammers can’t wait to find a way to abuse it. Quite a common practice these days is to set up a fake twitch account with a nickname closely resembling that of an actual popular streamer and here we go. Now, this method is basically phishing just in different clothing. However, since you would usually expect to receive a link in your email, you might get caught off-guard here. Here’s a very well designed visual guide of how all of this works: 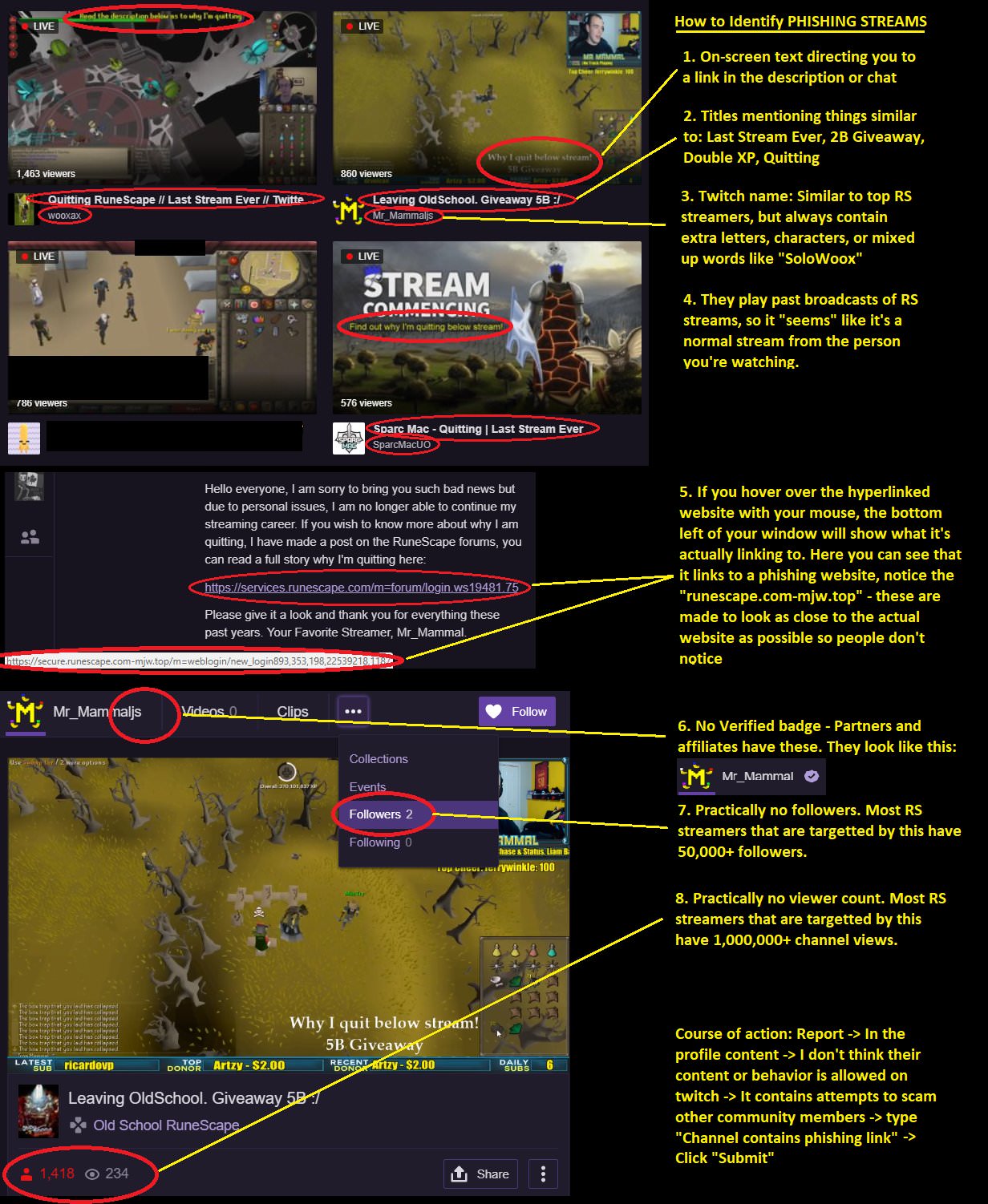 A comprehensive instruction on how to spot a fake streamer

This one is a no brainer, yet still not everybody realizes that a password “password” does not make your account secure. Or “passwerd” for that matter. Okay, maybe we’ve got to the point where people are enough technologically savvy and don’t do this anymore. Still, how many different complex passwords can you remember? Ah, let’s just use that same password for my email and my RuneScape account as well. WRONG! First things first, your password should be more than 8 symbols long, because even relatively primitive programs can generate and guess it if it’s shorter. Indeed, it should not be a password, but instead a passphrase: a long line of text with numbers and special symbols in it, which is also different from the one you use for your email. First, such passphrases are close to unhackable, second: even if you get hacked, you will be able to recover your account through your email. All those precious hours put into killing virtual mother nature will not go to waste!

Always remember: keeping your account secure is your responsibility as well. Game developers have sophisticated protection measures, so you must do your part. And for those who never got hacked and cleaned – come cash out your RuneScape wealth and sell us your RuneScape gold for the best price! Unlike those pesky scammers, we’re fair traders here.