The double XP weekends first started not with double XP event, but rather bonus XP event, back in 2010. The way it worked was that a player would log in during the event and gain bonus XP which scaled in reverse with the time they spent playing the game: the longer you stay logged in, the less XP you receive for any action made in-game.

Double XP Weekends and the Community

Double XP weekends disturbed the somewhat still waters of the RuneScape community. Some were in favor of them, while others were strictly against it, both sides having their reasons.

Those in favor of double XP weekends stated that it was rewarding for players who could not spend much time playing RuneScape, especially during the week. These were mostly those players, who would already log in mostly during weekends, due to them having various real life responsibilities.

Looking at the wider picture it was also obvious that such event brought a lot of people online. It must also be mentioned that a membership was required to participate and this brought in additional revenue to Jagex’s coffers, meaning that it was good for the company and therefore, the player, who could then expect more resources to be put into game development.

On the other side there were people who were strictly against it for couple reasons.

First, this was obviously undermining the already hard-earned achievements, especially of those who were in the competitive skilling community. Try walking in their shoes: they have spent a lot of time and runescape gold to earn their ranking, earn their skillcape. This was something to be proud of and with double XP weekends players who invested a lot less effort were able to claim the same sweet prize. This argument, however, was weakened by the fact that when double XP weekends launched, microtransactions were already introduced into the game. And as any RuneScape 3 player knows, microtransactions provide a ton of bonuses to XP, not only cosmetics. 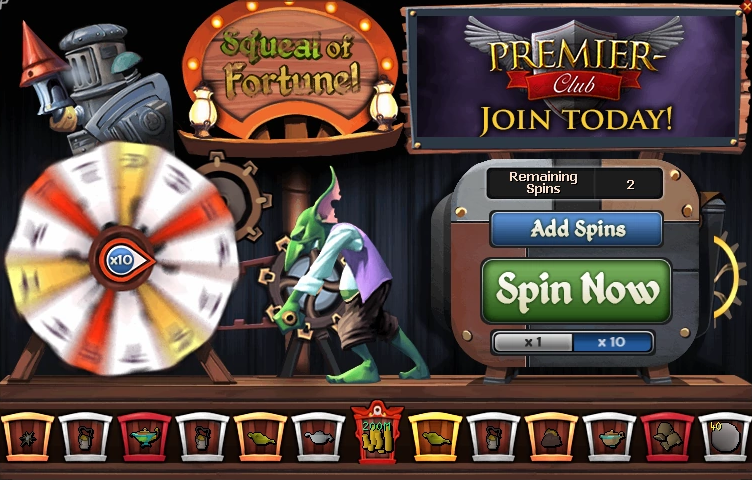 Squeal of Fortune definitely changed game experience, for better or for worse

Second. double XP weekends really messed up game’s economy. Really, really badly. Nevermind the inflation which can be clearly seen in RuneScape 3 currently. Inflation in the game can actually be a good thing: new players can get firm footing way easier and you can say that it even makes items in NPC shops cheaper (not directly, of course). That’s why some money making methods that work in OSRS, don’t work in RuneScape 3.

The worst to the game’s economy was the constant crash of item prices and rise of material prices for skilling, since players would buy materials in bulk so that they can later use them during the double XP weekend for maximum effect. This had a hugely destabilizing effect and forced players to do things they would not do otherwise, such as selling their gear before the double XP weekend and then later repurchasing it, just so that they avoid losing bank value. In addition to that, a new caste of RuneScape player emerged: a merchant who would abuse this situation by speculating.

OldSchool RuneScape’s launch was welcome by many verteran players, especially those who were dissatisfied with the current state of affairs. A significant part of the community started leaving RuneScape due to microtransactions and the very double XP weekends we discuss today. With numbers of people online plummeting and private OSRS servers on the rise (and making quite a profit), Jagex saw and took the opportunity and introduced OldSchool RuneScape, also known as 2007 Scape, since it was the 2007 version of the game. Initially, it only had maintenance updates, but due to the influx of players and increasing popularity, Jagex started actually updating the game and implemented a unique polling feature. Players could now vote for updates they want and vote against updates they disapprove of. The feature itself, although mostly positive, is a somewhat of a double-edged sword: Jagex sometimes creates parts of content only for the suggested update to be rejected by the community, case in point, Sailing. But let’s get back to today’s topic.

Since Jagex is faithful to the community by listening to it through polls, here are basic reasons why double XP weekends will never be introduced to OSRS:

First, OSRS is a sort of a refuge for players who enjoy RuneScape, but quit because of various changes, which can be argued for or against.

Second, with the introduction of microtransactions, competitive skilling in RuneScape was basically non-existant. Therefore, double XP weekends already were a non-issue.

Third, keeping in mind the above, it can be speculated that in case such feature were to be considered for OSRS by Jagex, it will be polled and we can all see how that poll would go. 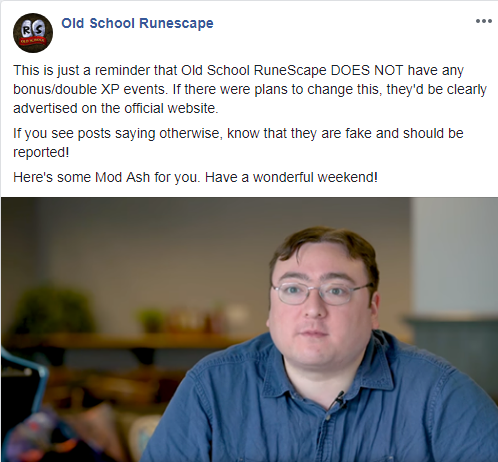 Jagex not about to start holding double XP weekends in OSRS

To summarize, it is clear that double XP weekends will not be introduced, not in the way that undermines competitive skilling or the voice of the players. Jagex also repeatedly stated that they are not going to implement them in the near future, nor is it in their plans to do so. And if you see a double XP weekend being advertised somewhere, please, do yourself a service and do NOT click on that. That’s an outright scam and no one wishes to lose the account they cherish so much. And in case you have done so before reading this post and by some miracle weren’t hacked yet – go and change your password. NOW!