Greetings, fellow adventurers! I see that you have stumbled upon this rather unique world, Gielinor. Yes, yes, I noticed the confusion in your face and before we move on I will calm you down: I felt the same once and I completely understand how you’re feeling at the moment. What is that? Oh, you have completed Tutorial Island, you say? Not to undermine your achievements, but you still have a very long way to go and much to learn. Of course, I know what those friendly folk there taught you. And it’s just a tiny fraction of what you need to know before continuing on this journey. Don’t look so upset, I told you I’ve been through the same as you did and believe you me when I say that I’ve made plenty of mistakes, some of them I’d rather not mention, since I’ve been laughed at already as it is and don’t need you getting a smug attitude and walk away without gaining any wisdom. Ah, yes, yes, you’re impatient one, forgive me for taking up all this important time of yours with my silly introduction. Here is what you need to know.

Now, now, don’t frown so hard or your face will wrinkle in no time. Hear me out. If you’re a beginner, it’s all good to not purchase a membership. You need to get the feel of the game and see whether you enjoy it or not before you decide to put offerings for the makers of Gielinor. However, if you seem to like it here or if you are an adventurer returning from your long retirement and interacting with this world through that device they call “mobile phone” or “a tablet”, a trendy device which youth will abandon in a year or two, if you ask me, and know what awaits you in your path to glory in Gielinor, I strongly recommend you get a membership. This way you will lift the invisible walls that stand between you and so many exciting adventures, from which you will learn so much things, that you will feel like a completely new person. There is no need for you to butcher all those innocent animals if you already know what you wish to do with your time in Gielinor. Gods, I have even prepared this pay to play leveling beginner’s guide for you in case you decide to get a membership from your day one. There are three ways to acquire this privilege: you can pay with that money of yours from Earth, you can buy these new things called bonds with the wealth you amassed in Gielinor or you can arrange a deal with the friendly fellows here and get some RuneScape 3 or OSRS gold for a fraction of a cost! And if you have never been on Gielinor before and wish to try the game out, you can always start with simple quests given by various folk around here and/or take a look at other choices and decide what’s best for you.

I’ve heard stories of some hypnotizing spell which forces people here to do various things: some simply walk around while others are hard at work day and night or fight against monsters which are so plenty in Gielinor. Important thing to remember is this: if you are not one of those magicians who can inhabit multiple bodies and wish to focus only on that special one, it is recommended by many wise sages to avoid these bots, else you can be banished from the land with no chance to return. I have a scroll about botting if you’re interested to learn more, two actually, so there’s no need for me to take up your time unnecessarily as you can look those up if you wish to.

Often new adventurers are so excited that they sometimes forget that there are people around who need help! I saw many an adventurer beginning their journey butchering cows and slaying goblins with such an ease, they don’t even take a single hit. And of course that is a statement that they’re on a good path, but also that they are not pushing themselves enough. Why not ask a chef about his problems with Duke’s birthday party? Or show those dark wizards by south Varrock gate that their mischievous attacks on newcomers will not be tolerated any longer? Why not thwart those wizards’ plans to summon a powerful demon that would wreak havoc upon this world? All these folk in need of your helping hand will not only thank you, but they will also reward you! I must say that some of these rewards are extremely valuable and sometimes people will return you the favor by allowing you to access an area that otherwise would be outside your reach or use their tools and equipment so you can craft more efficiently. Always consider doing quests. 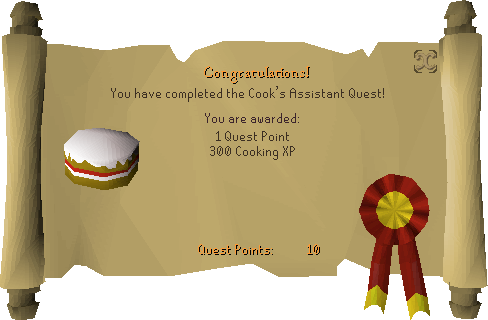 Ah, Cook's Assistan quest... One of the easiest ones, also giving you the taste of that addictive feeling of achievement... One of many to come

If you have any other questions, brave one, I’m afraid we’re out of time for now. Make sure to find me later and I will tell you more.