Everyone is excited about the release of dragon claws in OSRS and I’m no exception. I’ve been waiting for this update since the release of Old School Runescape and all this waiting is coming to its end. This Thursday, Dragon claws are finally going to be released! And since I can’t contain my excitement, I will share the story of how I pked my first pair of dragon claws back in the year 2011.

It was a boiling hot summer’s day and I was sitting at my desk in my underwear, sweating my balls out and casually playing Runescape. This day seemed like any other day, I was flipping items using the Grand Exchange and while I was waiting for my offers to complete I was pking. My regular pk gear was kind of cheap. I used to wear rag gear like black d’hide chaps, black d’hide vambraces, black d’hide body, amulet of power, snakeskin boots, a coif, ring of recoil and a magic shortbow with saradomin arrows and I was pissing off rushers. I had 99 magic and 99 range and my defense level was 40 so at level 86 combat I was one of the strongest rune pures around.  I would spend most of my days pking and marching but this day was different. This was the day of my first of many dragon claws pk.

I was standing in wilderness, protecting the innocent pkers from the not so innocent rushers by attacking the rushers whenever they tried to go in for the kill. I saved quite a few runescape lifes that day and protected people from losing their hard earned gold. But little did I know, the rushers were plotting on my death. One of them had enough of my heroic actions and decided to end my runescape career by assassinating me with his dragon claws. Little did he know I had a few tricks up my sleeve. Firstly I must mention, that the world I was pking in was no simple world, you couldn’t use protect items here and upon death every single item would be lost. Secondly, I had vengeance spell activated and I was ready to cast it again once I was attacked. I was ready for whatever was coming my way.

I was standing still, waiting for the dragon claw rusher to make a move. I saw him drink his potions. He was confident he would get the kill. I saw him running at me and I knew this was go time. He hit me and broke my vengeance and in a blink of an eye, half of my hp was gone. I didn’t panic, I activated my vengeance once more and I used a magic short bow special attack. He hit me again and he killed me! But killing me had its price. In the process of killing me he died aswell. I spawned in Lumbridge and my whole body was shaking. I just pked a pair of dragon claws and I had a minute to get to the spot that my opponent died in order to collect them. I knew what I had to do, so I rushed to the bank, grabbed a glory and teleported to Edgvile as fast as I could. I rushed to the location of my opponents remains just in time to loot every single valuable item he lost. Unfortunately I didn’t make a screenshot of the loot on the ground because I wasn’t sure if I would make it in time to pick the items up, but once I was out of the wilderness I made a screenshot of the loot. Here is the picture. 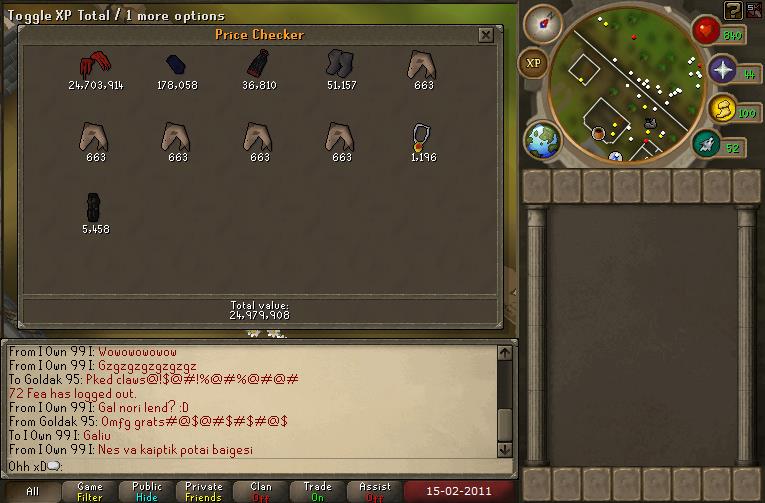 I was ecstatic! This was one of the happiest moments of my runescape career and within a few months I pked a total of 30 dragon claws. I made so much runescape gold pking I would constantly sell rs gold to gold shops and I made quite a bit of money at the time.

I hoped you enjoyed this story as much as I enjoyed sharing it with you. I have a few more pking stories I will share in the future and there is a possibility that once the dragon claws are released in OSRS I will get to relive the experience of the first dragon claw pk now in Old School Runescape. With all the new weapon and armor releases in 2007scape you may be short of runescape gold. So if youre looking to buy cheap osrs gold, aswell as rs3 gold, be sure to use our shop because we offer the best gold prices in the market.